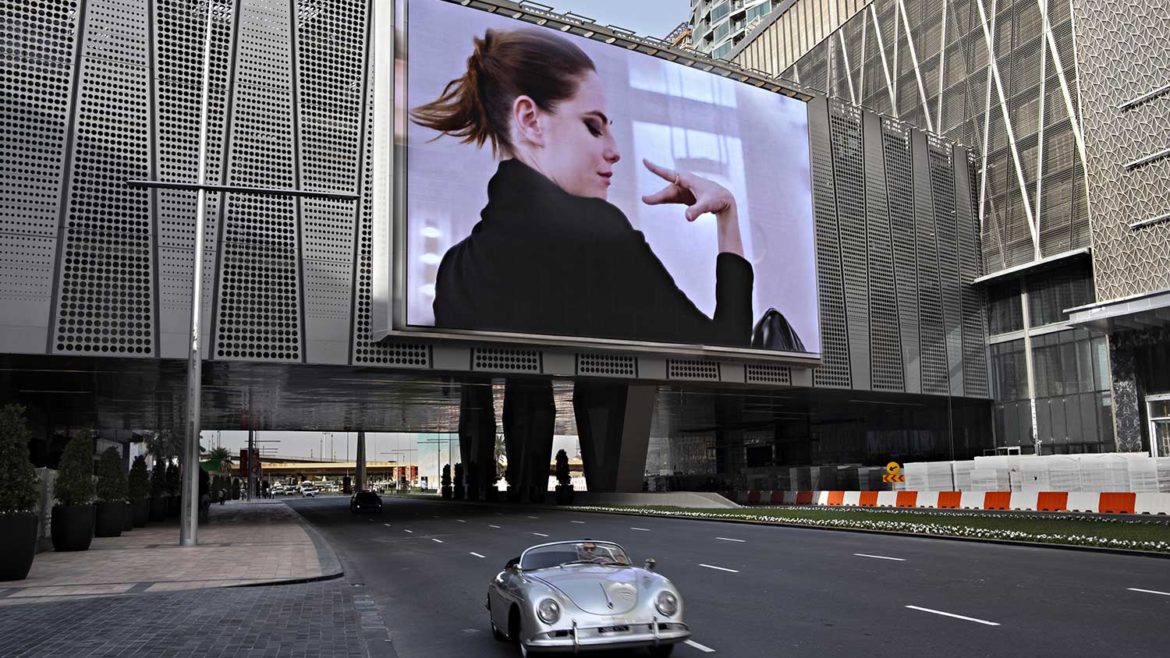 Dubai is the global city where the unthinkable is possible, urban development is unlimited, and happiness is promoted. 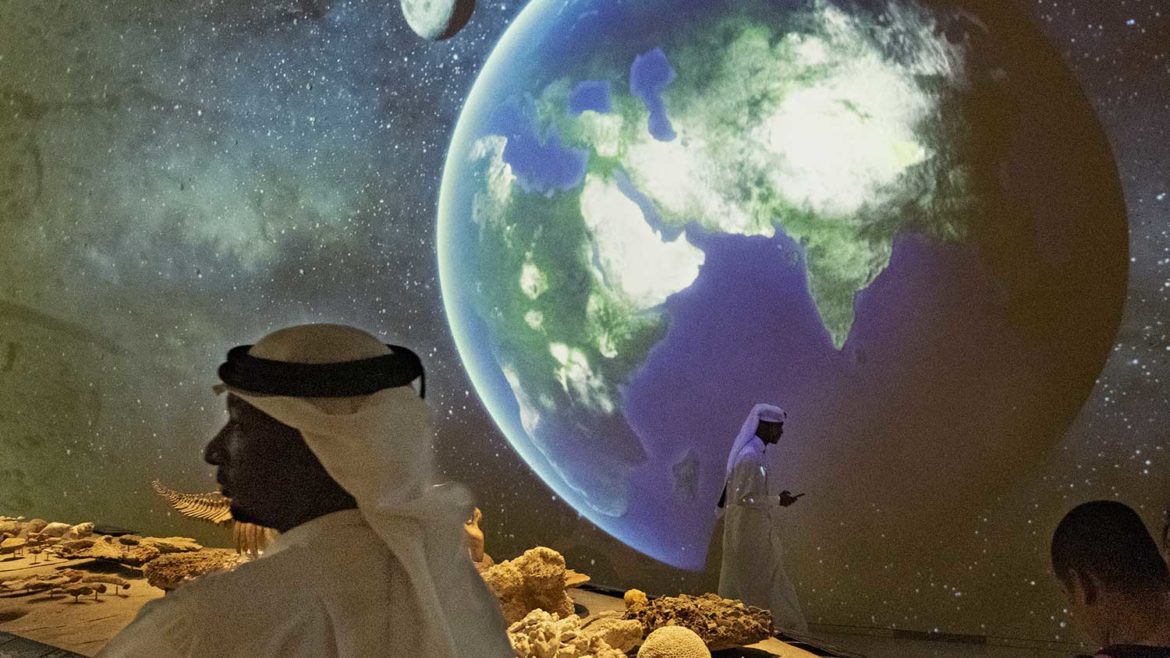 Qatar has a continuously changing urban landscape and is reasserting its national identity. Frequent professional travels to Qatar have provided an occasion for observing and recording some of the developments.

Qatar is an extraordinary country.
Its total population grew approx. 24-times from approx. 111,000 in 1970 to approx. 2,687,000 at the end of 2019. Of the latter, approx. 336,000 were Qataris and approx. 2,351,000 were non-Qataris.
Qatar possesses the world’s third largest gas and oil reserves. It has the world’s highest income per capita. It has adopted a very ambitious model of development.
Politically and diplomatically, it seeks to play a role reflecting its wealth more than its size.
This is also reflected by the fact that Qatar organises the soccer World Cup of 2022. The total costs of the event, including the construction of stadiums, metro lines and other infrastructure, is estimated at approx. 200 billion USD.
All this has resulted in a continuously changing urban landscape where especially in downtown Doha the recent new is considered already old and being replaced by the present new.
Along with the enormous economic changes, profound social changes have taken place over the past fifty years, with an acceleration over the past two decades. Health care and education has improved tremendously. Qataris are well-educated, fertility has decreased rapidly, women employment has increased, to mention three key developments.
In the light of these changes, reasserting the Qatari national identity has been a major concern of the rulers. This has, among other things, materialized in the (re)construction of heritage areas and major museums, including the Souq Waqif (reconstructed market, 2008), the Museum of Islamic Art (2008), the Katara Cultural Village (2010), the Msheireb Museums (2015), culminating in the National Museum of Qatar (2019).
In June 2017, Bahrain, Egypt, Saudi Arabia and the United Arab Emirates (UAE) imposed a land, air and sea blockade on Qatar presenting a list of demands. Instead of giving in, Qatar resorted to an enormous reorganisation of its supply chains and accelerating its efforts to become much more self-reliant. It also resulted in a reinforcement of national unity and the support for the Emir Sheikh Tamim bin Hamad Al Thani (born 1980) in power since 2013.
Qatar is a small country (11,500 km2 – 158th in the world); is basically flat (highest elevation 103 m), and is a barren desert covered with sand and gravel. Its climate is arid (but there is occasional torrential rain), very hot (40-45° C in summer but relatively cool winter), and humid (notably in the summer).
Cars are central in Qatar’s life. Highways resemble those of Southern California more than the size of the country. Traffic is sometimes extremely heavy in an around the capital Doha. The newly build metro may serve to alleviate some of the congestion. But Qataris are unlikely going to give up their cars, even occasionally but then, there numbers are small.
Shopping malls and hypermarkets are essential to Qatar’s life. New ones are being built continuously while older ones or becoming out-fashioned. They all provide not only for goods but also for cooling and spaces for socialising.
While Qataris are well-educated, work force participation is not high (notably among women). In any case, the limited number of nationals is by far insufficient to cover all the jobs the countries development strategy and its citizen’s requests demand. No Qatari works in a low-skilled, low-income job. Non-Qatari’s, instead provide for the full range of jobs. Europeans and other westerners for highly skilled. Arabs and Asians (notably Indians, Pakistani, Bangladeshi, Filipinos, etc.) for low-skilled, mid-skilled and, to a limited extent, for highly skilled jobs.
Working and living conditions for the low-skilled workers in the construction and service (hotel, restaurant, taxi, cleaning) and domestic-work sectors have been rightly heavily criticized and scrutinised. Since 2018, Qatar has taken a long overdue path of reform in cooperation with the International Labour Organisation (ILO). Even if the reform will increase the costs to the country and its citizens, being one of the richest countries in the world and its citizens having the highest world’s highest GDP, this reform is not only legally mandatory but also an ethically obligation. Today (March 2020), it is too early to make a comprehensive assessment of the impact of the reforms on the working and living conditions of the low-skilled non-Qataris.
Initially, various thousands of pictures were brought down to approx. one-thousand. These were further reduced to 150 and then to 72. The main criterion was the artistic quality of the picture, the second criterion was the need to create a comprehensive view of what I have seen. The 72 selected pictures were divided into two sets of 36. Both are published on this website. The first set has also been printed and is exhibited in my studio “La Pace 72”.
Besides these two sets, a third set of 23 pictures was made of the iconography of Sheikh Tamim bin Hamad Al Thani Emir of Qatar which emerged as a response to the June 2017 blockade. 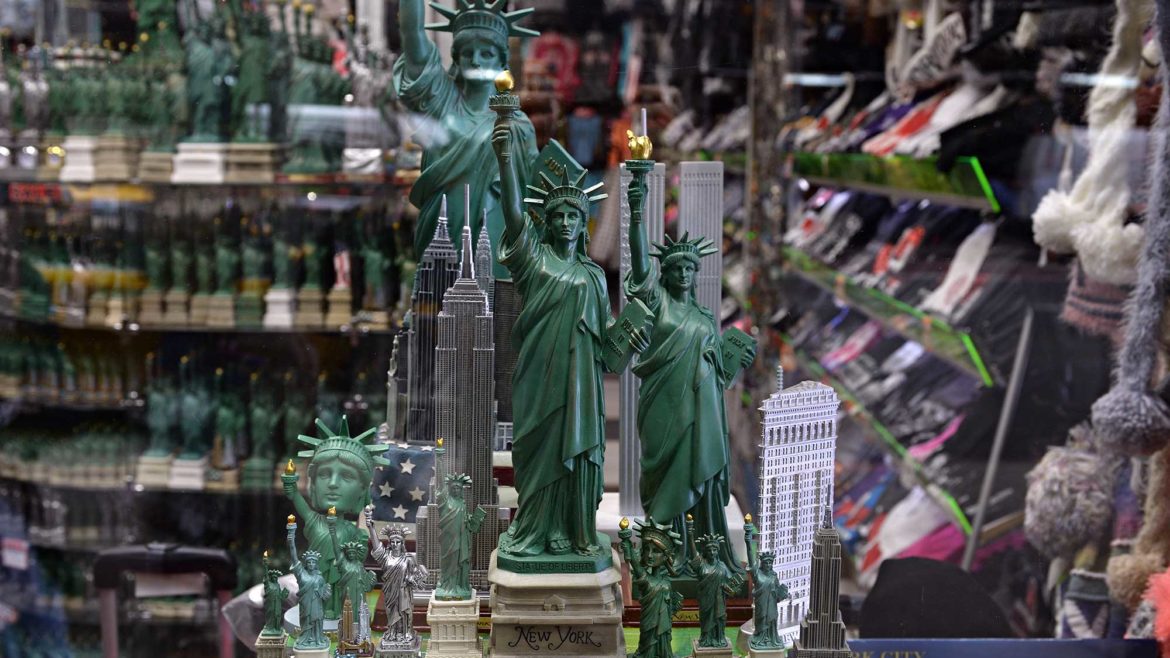 New York City is of course the world’s greatest attraction for urban photography of all kinds.

This is because of the history and the nature of New York. But also because of the work of many photographers. Alfred Stieglitz, Lewis Hines, Paul Strand, Berenice Abbott, Walker Evans, Robert Frank, Lee Freelander, Gary Winogrand and many others. How one views (or at least how I view New York), is also heavily influenced by other photographers of America, including William Eggleston, Lewis Baltz and Stephen Shore). New York is full with highly recognizable buildings, monuments, and street scenes. This is not only what they symbolise, but in many cases also because they have been so often photographed over the past 150 years (and appeared in so many movies). Thus, it is impossible to spend a week in NYC without stepping in the footsteps of these photographers and effectively being influenced by all of them, all the time, and everywhere. In fact, one may think to see things in one’s own way but, as for everyone, small and big, one is heavily influenced not only by the objective physical objects and people that one encounters, but also by those who were there before. And, if one spends only one cold week in early February 2019 with his partner and relatively young children, one cannot but (re)visit many of the usual places. But, inevitably, will also express ones own way of seeing. 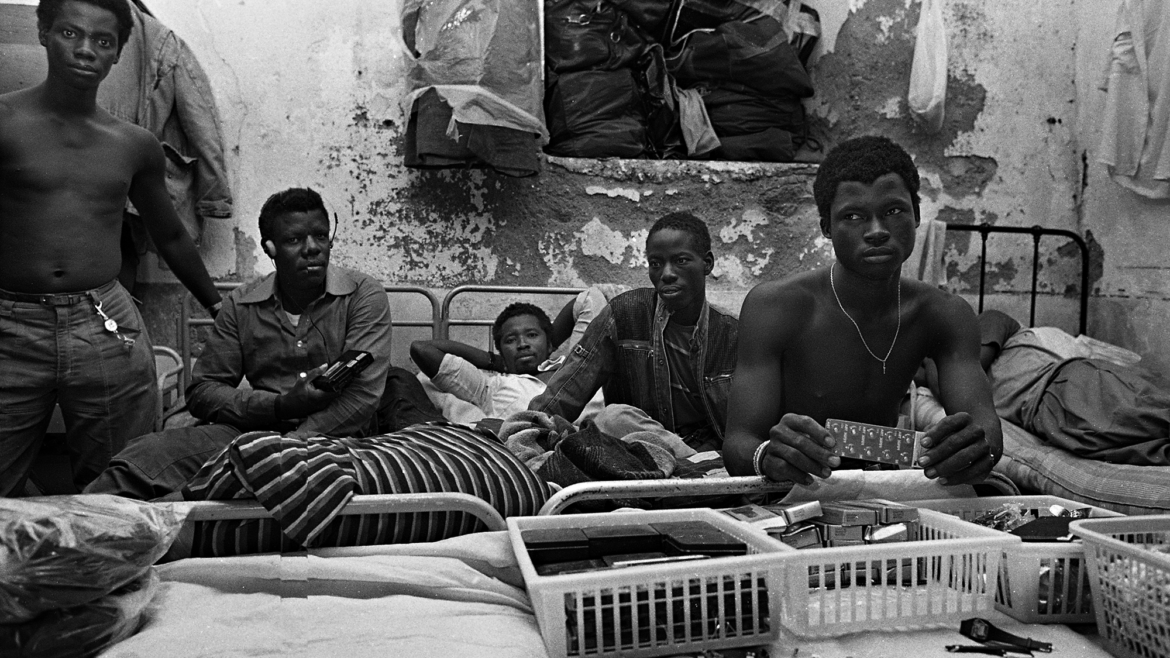 In 1985 Brouwer was asked by Bruno Tron Director of the Migration Service of the Federation of Protestant Churches in Italy (FCEI) to develop a photo exhibition on immigration into Italy.

At the time, Italy was still known as a country of emigration even if since the mid-1970s departures of Italians were outnumbered by the arrivals of immigrants. By the mid-1980s, the total number of immigrants was estimated to be at least half a million (about one percent of the population). The scope of the exhibition was to document their living and working conditions for the local chapters of the Italian protestant churches and the general public. Brouwer, at the time based in Catania, in five months moved from Mazzara del Vallo in the South-Western part of Sicily to Milan in the North, shooting approx. nine-hundred pictures. Only a small set of them (complemented by a few pictures from UNHCR) made it into the twenty-five panels of 70 x 100cm that made up the exhibition. A long-term friend Anna Bertin informed Brouwer in November 2014 that the panels were stored in the FCEI offices in Rome and may be disposed of soon. Brouwer managed to recover the panels almost thirty years after they were produced. He subsequently traced the negatives and, together with  friend the professional photographer Franco Guardascione, made a new selection of thirty-two pictures grouped into four subseries and printed them (24 x 30cm) on Ilford multi-grade fiber based baryta coated paper, framed and exhibited them in Brouwer’s workspace “La Pace 72”. The negatives were scanned and grouped in exactly the same way as the prints. 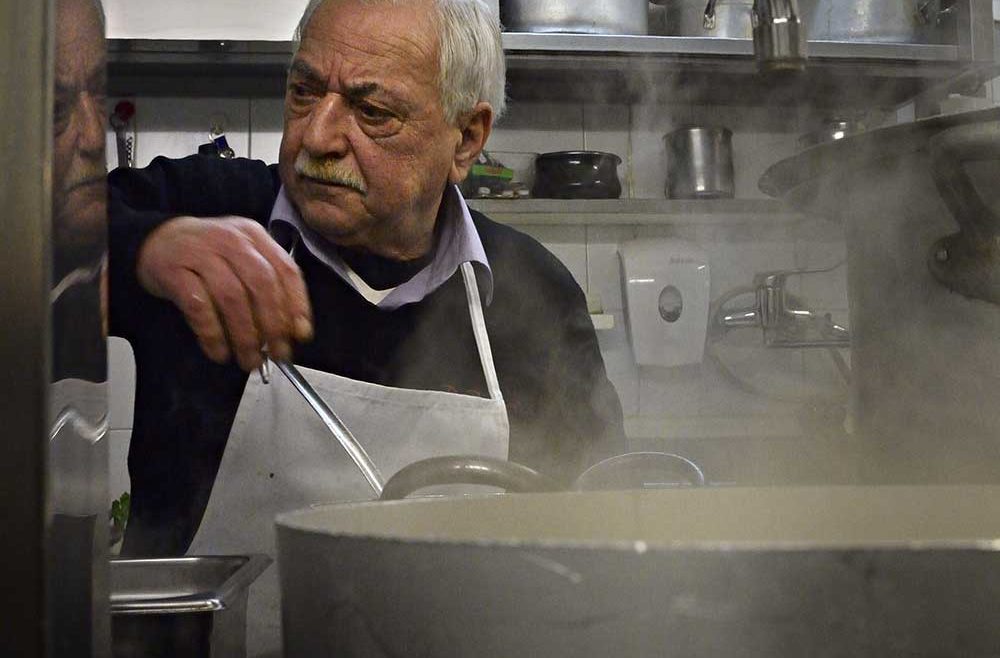 The Trattoria “Da Rocco” inside the Sant’Ambrogio market of Florence is a very special place.

Because of its volcanic owner Rocco, his son Paolo, and his collaborators. Because of its location and its particular architecture, with a small but fully equipped kitchen, tables for 4 to 8 people directly accessible from outside, and with a central corridor for the personnel to serve the clients. Being an occasional client (and a frequent one for one year when I worked nearby), my main idea was to make pictures of the clients and their interactions with the personnel. In order to get acquainted with Rocco and his collaborators, I asked whether I could take pictures from the early morning, when they would prepare the dishes. Thus, on 28 December 2017 from just before 7 am onwards they allowed me to make pictures unrestrictedly up to the point that they eventually ignored my presence. The enormous energy and the good spirit of Rocco and his colleagues was contaminating. Eventually, the most interesting part were the hours with the team, before the arrival of the first clients. Thus, sixteen pictures of several hundreds were selected, post-produced, printed 22 x 33 cm in colour on cotton paper, framed, and exhibited in “La Pace 72.”